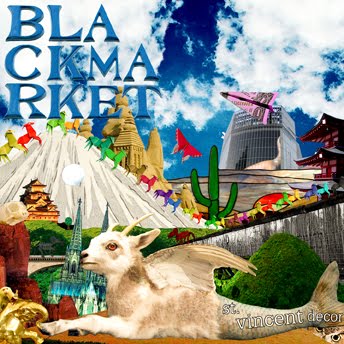 Blackmarket: St. Vincent Decor
Arizona was going to be the doorway through which John McCain was to become President of the United States of America. We all know how that adventure ended. What we don’t know is how the adventure will pan out for his fellow Arizonians(?) Blackmarket. The trio come from The Grand Canyon state with their second album St. Vincent Décor. They’ve all ready been out touring and do have some success, but the question is, how big can they get?
Coming from the Southwest you’d think there would be a heavy influence of Latin music by way of Mexico. But let’s not forget, America is a big melting pot so there are other types of Americans in the state. Blackmarket put together an Indie rock sound that borders on garage band. They’re first single “Tongue Twister Typo” mixes heavy drums with grunge style riffs all while working in a poppy melody.
More often than not, I found myself hearing early rock influence or at least undertones in their music. Tracks like “Blue Lemon” could easily be worked into a Beach Boys song if you had more harmonies on the vocals. But the track also shows lead singer and guitarist Daryl Lamont’s exceptional play. Pulling out the acoustic guitar, its easy to see that Lamont’s got loads of talent. But he is no one song wonder when it comes to going unplugged. On the track “Catch & Release” he goes all out plucking with the cunning technique of a Sushi chef. I mean, you can’t make a mistake down to the centimeter and pull off playing the way he does. It’d stick out like a sore thumb and out you quick.
Overall, after listening to St. Vincent Décor I couldn’t help but feel an essence of late 90’s rock. These songs could have played on the radio back in the day. But that’s not to say their outdated. They have a freshness and originality to them that can be enjoyed on their own merit. Its amazing to see that this is only their second album. It sounds as though they’ve been playing for years. Hopefully these Arizona boys can take over the world, without that crazy Electoral College to get in the way.
Rating: 8.3/10
MP3: Blackmarket “Blue Lemon”
Buy: iTunes