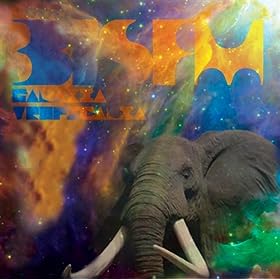 Blasfemea: Galaxia Tropicalia
Portuguese power pop, electro rock band Blasfamea have a new release out. Galaxia Tropicalia consists of ten songs, all named after women, including a cover of Michael Jackson’s “Dirty Diana”, and one untitled track. Quick attempts to find a similar sound bring to mind Kill Hannah. Blasfemea’s singer Tiago Amaro sounds an awful lot like Mat Devine of Kill Hannah. But all in all, the two bands just sound so much alike.
The biggest difference is the Latin feel that Blasfemea throw in some of their tracks. They bring the Iberian feel to their music on tracks like “Maria”, “Eva”, and “Linda”. At other times they play a more generic form of their music that seems to cater to what they hope American audiences will want. These tracks take away from what works best for Blasfemea, and that’s their roots.
A nice touch is the addition of “Diana”, their take on M.J.’s “Dirty Diana”. This is perhaps the sound they should strive for if they want to blend in with other electro pop bands from the States. But they may be better suited sticking to their strong points. Another fine touch is the last track which is untitled. It brings to mind a piano tune from the saloons of the old West. It is a bit quirky with some of the lyrics, but it feels more fun and less forced than some of the other tracks. Again, I just feel like there are times on Galaxia Tropicalia that the band is trying to be something they’re not. They still put together a good sound and are easily worth the time to listen. Here’s hoping they find a happy medium where they can work at their best.
Rating: 6.9/10
MP3: Blasfemea “Maria”
Buy: iTunes