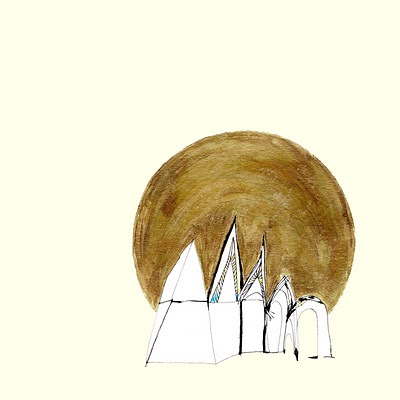 Donovan Quinn and The 13th Month: Your Wicked Man
Fans of psych-folk-pop duo The Skygreen Leopards are already familiar with Donovan Quinn. When not recording or performing with Glenn Donaldson as The Skygreen Leopards, Donovan fronts Donovan Quinn and The 13th Month. The four piece band released their second album last August titled Your Wicked Man.
The band reminds me of 60’s music. At times they sound like a mellow psych-rock band like on the track “Mom’s House”. Think Jefferson Airplane if they weren’t as loud, slowed their tempo down, and were fronted by a melancholy man.
But for the most part they have a heavy folk feel. The music is slow throughout the album using acoustic guitars, piano, drums, and violins. And Quinn’s lyrics are narrative telling a story in each song. But the sound of his voice is odd. In a way he reminds me of Arlo Guthrie if the folk singer’s voice weren’t as smooth and he mostly sang downtrodden songs with no uplift to them at all.
In fact, the happiest sounding track on the album is “Sylvia and the Gremlins” which borders on the sound of 60’s pop music. Yet, even here the instruments quicker paced, more party-like mood aren’t accompanied by happy lyrics. Quinn continues with his usual somber themes of what reality is mostly like. He croons “Sylvia lights a match and it’s our last one. She lies on her bed blowing smoke rings at the sun.” Life isn’t peachy, there’s a lot of troubled people in the world.
Still, the album isn’t all bad. Your Wicked Man may not be the album you want to listen to if you’re trying to have a good mood. Or if you just got that job you wanted. But the band puts in a solid performance and Quinn’s lyrics aren’t predictable ending in rhymes, the type of stuff that many a lyricist shoots for. He tells some interesting narratives along the way.
Rating: 5.3/10
MP3: Donovan Quinn and The 13th Month “Your Wicked Man”
Buy: iTunes or Amazon