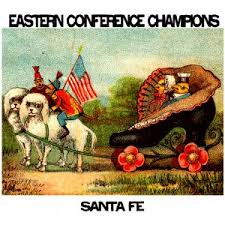 Eastern Conference Champions: Santa Fe EP
Originally from Philadelphia, the trio known as Eastern Conference Champions are now based out of L.A. Their EP Santa Fe is a pleasant intro into a band that deserves some accolades. They’ve performed on Last Call with Carson Daly back in 2007 and were featured on the soundtrack for The Twilight Saga: Eclipse with their track “A Million Miles Away”. So if you’re familiar with that track and you’d like to hear more, Santa Fe is definitely the album for you.
The opening track “Common Sense” starts off with a bass part that brings to mind Kim Deal’s signature style; strangely enough, the song does sound a bit like something The Pixies might have played. It’s no coincidence that Eastern Conference Champions have opened for the legend Black Francis himself. Lead singer, Joshua Ostrander sounds like a mix between Francis and Thom Yorke at times; it’s a bit whiny–nasally even–but it’s not annoying or painful to listen to.
“Bloody Bells” is right on par with “Common Sense”, only here we get a bit more lead guitar and the show isn’t stolen by the bass. The percussion doesn’t rely entirely on drums; you get some pleasant clanking in the background that gives the song some character. I’m not talking about anything like Soundgarden‘s “Spoonman”; this is a bit more subtle.
If you like the indie rock sound of the 90’s, Eastern Conference Champions might be worth a listen. Tor me, it was very endearing to listen to. It’s nice to hear something that would have sounded good back then, but know its fresh for the day.
Rating: 9.0/10
MP3: Eastern Conference Champions “Common Sense”
Buy: iTunes or Amazon