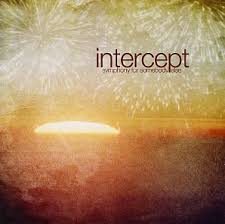 Intercept: Symphony for Somebody Else
Intercept released their third album Symphony for Somebody Else September 14th. I’m new to Intercept, but understand that they started out with more of an Emo sound. I won’t say that Symphony loses that sound, but there’s more of a blend to the genres.
A good part of the album I’d consider Indie-pop. Right from the get-go “Made to Fall” sounds like a pop station regular. Nothing too flashy, but nothing that gets totally lost in the fray.  “Rest of My Days” follows that same suit with a power chorus that gives it that extra umph. Not that Intercept and Neon Trees could be mistaken for one another, but the two could co-exist in the same genre.
Now that’s not to say that Symphony for Somebody Else is entirely a pop album. “Love is Like That” is more folk-rock. Perhaps it even as a bit of Christian Rock to its name with a chorus that ends “Love will save the world”.
“Every Native Face” has a dance beat to it. It is faster, more upbeat, still has a pop feeling to it. Perhaps something Taylor Swift might be better known for. There is a bit of a country feel to the track. It is fun, just not that all-night clubbing sort of way. No, it feels more innocent.
Overall, the new trend for Intercept isn’t totally new. There is a bit of that Emo feel underneath it all. But the pop is definitely pop. And the fun is definitely fun. Also, there is an innocence to the whole album, and I’m guessing their music in general. No cussing, no yelling, nothing abusive at all. Intercept aren’t blowing out any speakers. And that’s refreshing, because as one young musician told me “it is all about the melodies”.
Rating: 7.8/10
MP3: Intercept “Symphony for Somebody Else”
Buy: iTunes