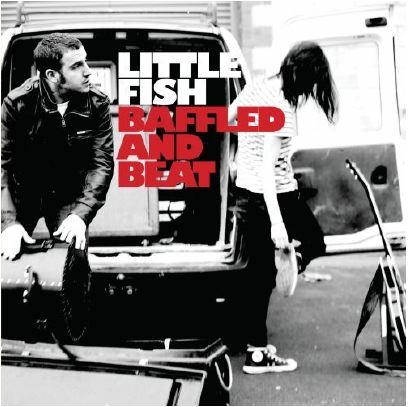 Little Fish: Baffled and Beat
Successful duets like The White Stripes, The Black Keys, Local H, and Eagles of Death Metal all have that ability to make loud, energy driven rock while keeping the mood intimate. Little Fish follow that fold with their May 11th debut Baffled and Beat. Lead singer, songwriter, and guitar player Juju knows how to front a band and take center stage. Its a bit remarkable, too, because she was more into sports when younger. But thankfully, the music itch caught up to her. And drummer Nez brings a variety of Rock influences and loads of talent on his part as well. Together, they sound like a duet monster with all the best parts of those other duets I’ve mentioned.
Juju’s voice reminds me of a mix between Cher and Grace Slick of Jefferson Airplane, all balled up in the energy we’ve come to know from Gwen Stefani. And that energy comes through excellently on tracks like “Am I Crazy?” and “Whiplash”. But where punk acts would flourish mostly on that energy, Juju shows that she can put together a complete song from music to lyrics to vocals.
Most notably, “Heroin Dance” sounds like a Led Zeppelin song. Juju really shines lyrically here right from the start with lines like “Rising blue smoke in the golden air where the promises you held have gone”. And from there she tells a story through metaphor that borders on the folksy/mystical almost myth-like work that Led Zeppelin was known for.
For the most part the only other accompaniment Little Fish use is a Hammond organ. But on “Luck’s Run Out” Juju sets aside the guitar for a piano. She does a great job mixing things up, sounding more like Fiona Apple than just a Rock singer. She’s clearly no pop singer, and unfortunately in the music business that’s where women tend to find their places as forerunners. Juju’s got that Janis Jopplin-like intensity where she’s clearly not afraid to mix it up in the heavily male rock genre.
Make no mistake, I do have a soft spot for duets that I can’t really explain. But that aside, Little Fish are very good and that’s just proven on Baffled and Beat. Its more exciting because this is their debut album. I can only imagine what is to come. I highly recommend this album for anyone who likes rock of any kind. You won’t be disappointed.
Rating: 9.6/10
MP3: Little Fish “Am I Crazy?”
Buy: iTunes