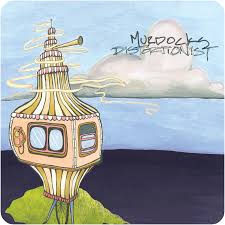 The Murdocks: Distortionist
It’s been five years since The Murdocks have released a proper album. In that time much had changed for frontman Franklin Morris and the band. Morris saw his personal and professional life fall apart. Divorce was one of those unfortunate realities he had to accept. The band crumbled as the industry lost interest.
Every ending has a new beginning, as they say. And for The Murdocks it came with the creation of new music from Morris’ seemingly downward spiral. It was enough to impress new bassist Kyle Robarge, who then introduced new drummer David T. Jones. The Murdocks were back. As Robarge put it, “We breathed new life into a dying band.”
Distortionist was released on September 14th, some five years after the band’s debut album Surrenderender. But I wouldn’t call this a second album. With so much having changed, it’s more like a rebirth.
Many of the album’s 15 tracks are attention grabbing. With so many songs, you’d think the album might be on the lighter side. But they all seem to pack a heavy punch. “Die Together” starts off with a heavy guitar lick reminiscent of Reverend Horton Heat’s “Psychobilly Freakout”. It keeps that rockabilly drumbeat all throughout, while the guitars go softer through the verse. As the chorus hits, Morris hits a scream-like peak as he goes into the morbid lyrics “And when we die together, it feels like holding hands. Someday we’ll all be laughing cold and underground.” The guitars pick up here as well before pulling back to leave a distorted solo and those rockabilly drums. Back to the Reverend Horton Heat lick at the beginning. Its interesting to hear something turned up a notch with that melodic “dum-dum-dum-dum”. Not the type of thing used in songs these days, arbitrary sounds used as fillers to change notes.
“Sleepy Queen & Charlie Brown” is more transparent, undoubtedly dealing with Morris’ divorce. The garage band sound infuses tons of energy. But most appealing are the lyrics and the vocals of Morris. When he hits into that chorus, that goes something like “Oh, you really put me down. I was your Sleepy Queen, you were my Charlie Brown. Kissing in the house of God. Forever now, we run in circles round. Boys and girls of Tiny Town”, it sounds like Van Morrison’s “Brown Eyed Girl”.
The track “Widower” offers something different, more mellow. It has a bit of a bluesy feel, but more a 50’s slow rock. Right down to the top hat used, and the chord progressions. The only difference has to be the screaming that kicks in around the time he swears. Clearly, this type of music would have been censored back in the day. If Distortionist is the breath that brings this band back to life, I want to see where they go. The album has tons to go through and is exactly the type of thing I would have loved in high school. It’s a bit of a mish-mash of genres almost bordering on the Emo-like despair the vocals at times dress in. But this is Indie Rock at its finest. Like I said, I would have loved in high school, which makes this a bit of a timeless classic for me. Check them out.
Rating: 8.8/10
MP3: Murdocks “Die Together”
Buy: iTunes