B.O.M.B. Fest was this past weekend in Hartford, CT and I was lucky enough to attend. To recap, I present a top ten highlights in photos. 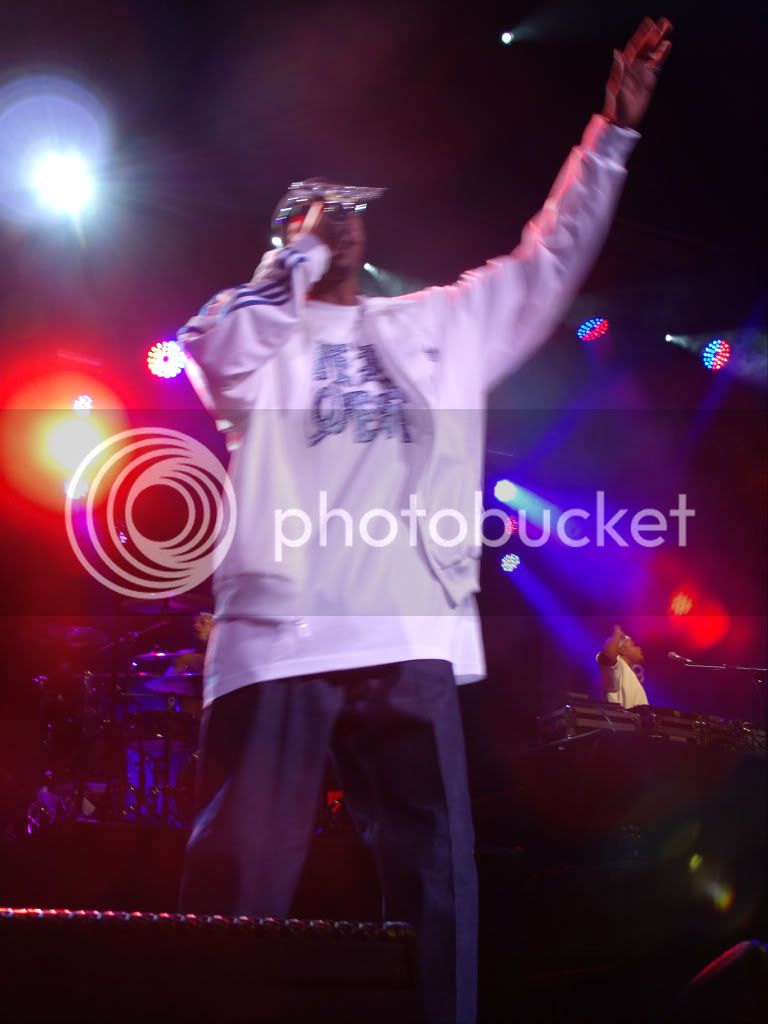 I know what you are thinking, “how could Snoop Dogg barely eek out a spot in the top 10 countdown?” Well, it is pretty simple. First, Snoop took the stage over a half hour late. The crowd was packed into the arena with no entertainment for almost a full hour by the time Snoop took the stage. At one point during the wait, a chant of “bullshit” actually broke out. Once Snoop did hit the stage he did a standard set of greatest hits including “Gin and Juice”, “I Wanna Fuck You”, “That’s That Shit”, “Nothing But a G Thang”, “Drop It Like Its Hot”, and “Who Am I? (What’s My Name?)”. But in what was sure to be an abbreviated set (considering the show had to be over by midnight and Snoop didn’t take the stage until after 11), Snoop paid tribute to 2pac and Notorious B.I.G. by having his DJ spin their well known records and then pointing his microphone at the crowd, informing them to “sing along if you know the words.” This type of filler might be expected if you have a two hour set but for a set that was only one hour, it seemed a little unacceptable. In the end, it seemed like a trade off of the filler instead of playing hits like “Boss’ Life”, “Beautiful”, “From tha Chuuuch to da Palace”, and “Doggy Dogg World.” Also, I will add that I would have liked to have heard “Gz and Hustlas.”
MP3: Snoop Dogg “That’s That Shit”

I loved Coheed and Cambria back in high school when The Second Stage Turbine Blade first came out but the band outgrew me as their music became more and more ridiculous and their videos featured more and more centaurs. Still, I settled down to watch the band’s Sunday night set and I was amazed at their combination of technical proficiency and high energy. The band did manage to play a couple tracks from their first album including my personal favorite, “Devil in Jersey City.”
MP3: Coheed and Cambria “Devil in Jersey City”

Portugal. The Man were the first major band to take the stage on Sunday. Their early afternoon set time ensured that not many people were on hand to see the set begin. Luckily, Portugal. The Man is the kind of band that flourishes in atmosphere’s like B.O.M.B. Fest; their sound appeals to both hippie kids (who were plentiful on Sunday at B.O.M.B. Fest) as well as indie kids. As the band’s psychedelic pop sounds eminated out of the fairly empty amphitheater more and more people poured in. The band played a pair of new tracks as well as old favorites like “People Say.”
MP3: Portugal. The Man “People Say”

The Hood Internet were a victim of scheduling. They were posted against Against Me in the middle of the afternoon. Despite starting their set with about six listeners total, they amassed a huge crowd by sets end. Kicking the set off with Ice Cube’s “It Was a Good Day”, the set steadily gained momentum until it closed with Passion Pit‘s “Sleepyhead.”
MP3: The Hood Internet “Drop The Icebox Pressure (Omarion vs Mylo)”

The New Pornographers without Dan Bejar took the stage for a late afternoon Sunday set. The group’s time slot was changed and elongated due to Wiz Khalifa cancelling his set. The band took the set in stride playing many of their most well known songs like “The Laws Have Changed”, “Sing Me Spanish Techno”, “Crash Years”, and “Sweet Talk, Sweet Talk.” The set appears so low on this list due to the glaring omission of “Mutiny, I Promise You”, “Twin Cinema”, “Use It”, and “Letter from an Occupant”; any of which could have been input in the place of mediocre tracks like “All the Old Showstoppers” or “The Slow Descent Into Alcoholism.”
MP3: The New Pornographers “Sing Me Spanish Techno”

There is a good chance Titus Andronicus would have come in much higher on this countdown if they had not just played The Monitor start to finish but even with the questionable set list, it was still one of the highlights of B.O.M.B. Fest. Patrick Stickles and company seemed very humble and gracious to be playing the festival all while rocking out. Check out Amy Klein’s rock star poses for evidence of that.
MP3: Titus Andronicus “…And Ever” 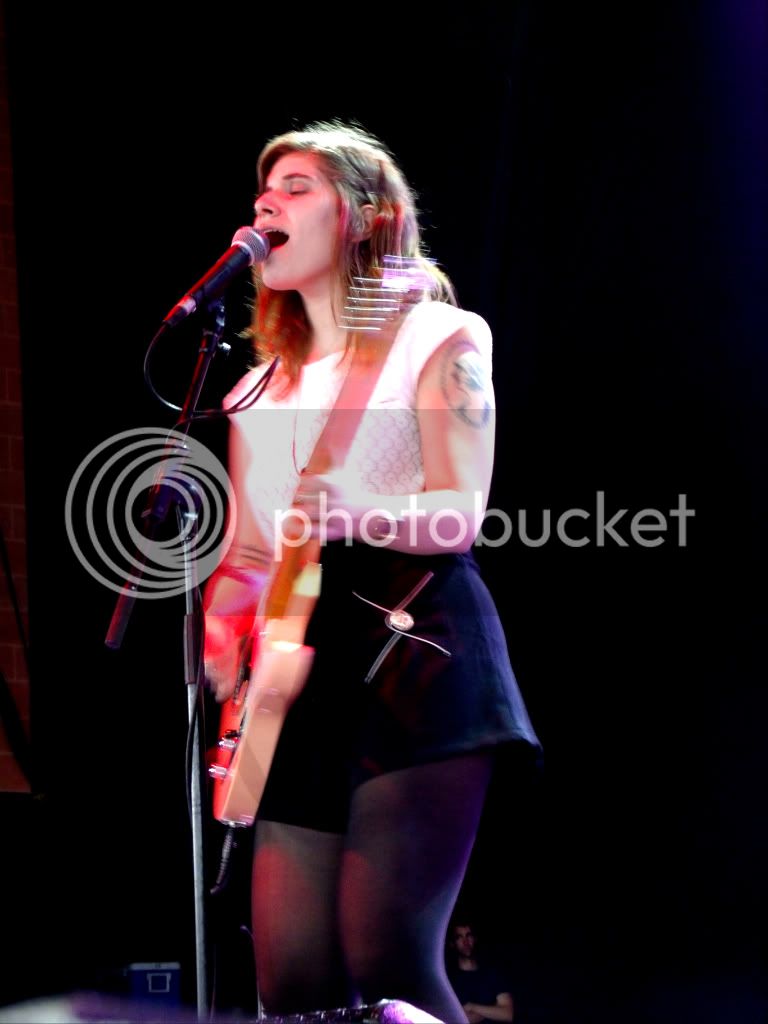 What made Best Coast’s set so great was not the set list; although the set did include “Boyfriend”, “When I’m With You”, and “When You Wake Up” from their split seven inch with Wavves. What made the set great was Bethany Cosentino’s awkward banter with the crowd when her bass player broke his string. For those unaware, it is incredibly rare for a bass to break a string so the bass player struggled to find a replacement string and then replace it on stage. During the process of replacing the string, Cosentino told stories about her cats, her tatoos, and going to see the Foo Fighters with her mom, making her seem all the more likable.
MP3: Best Coast “Boyfriend”

Wavves had a tough time slot, going on at 1:20pm on Saturday. They were the first major band I was looking forward to seeing at the Fest and they did not disappoint. Nathan Williams blazed through his set while seeming consistently on the verge of storming off stage due to the amount of vocals in his monitor. While still appearing to be an asshole to the sound man, he managed to win over the crowd with banal quips like “I won’t marry you. Not because of you but because I think marriage is disgusting.” Then after the crowd finished applauding this he said “I changed my mind I will marry you.”
MP3: Wavves “No Hope Kids”

It is hard to capture in photos what RJD2 does but RJ turned an ill-attended mid-afternoon Saturday set into a sweaty dance party in a matter of minutes. RJ played the part of a conductor and his symphony consisted of four turntables and a sequencer. With the set up, he was able to string together an hour long set that even mixed in such classics as “The Horror”, “Ghostwriter”, and “Let the Good Times Roll.”
MP3: RJD2 “Ghostwriter”

Weezer presented a set heavy on old favorites to close out day one of B.O.M.B. Fest. The set opened with Hurley’s lead single “Memories” but luckily that was only one of four post-Green Album tracks played in the set (the others were “Dope Nose”, “Perfect Situation”, and “Pork N Beans”). Rivers noted that it seemed like there were “more old school fans than normal” in the crowd on this night and he obliged by playing eight of the 10 tracks from the Blue Album and playing “Across the Sea”, “The Good Life”, and “El Scorcho” from Pinkerton. The highlight of the set may have been the encore which included the now much blogged about cover of Radiohead‘s “Paranoid Android.”
MP3: Weezer “Paranoid Android”