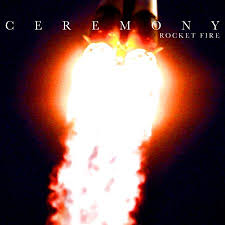 Ceremony: Rocket Fire
Ceremony are a Noise Pop duo who sound something like a modern day act inspired by Cure. Musically they sound a bit like a cross between Nine Inch Nails and The Beach Boys. How you ask?
The album is filled with guitars that are distorted and a bit too loud, drums that are loud and yet somehow remain hidden behind the melodies, and vocals that are distorted yet hushed. The loudness is the NIN part, while the melodies more resemble something the Beach Boys may have shared with us.
All the while, I couldn’t help but feel an Emo aspect to the music. If it weren’t for the lyrics inside the album, I’d have no idea what was being sung. And this is the part the reminds of The Cure. Lyrics like “I walk through dreams alone, alone in dreams is all I know” (“Never Make You Cry”) and “blinded by too many eyes she’ll never see that I live for her smile” (“For Her Smile”), and the kicker “All I know is sorrow and no tomorrow. I live in dreams of what used to be” (“Regret”). Every song is about some type of misery. Along with the same old formula of loud music that sounds like its trying to be hushed, the vocals just don’t do anything for me. In fact, the singer sounds like John Flansburgh of They Might Be Giants on some serious downers.
One stand out track was “Marianne”, which as you can see is about a girl. On this track the vocals sound almost exactly like Flansburgh on downers, right to the cadence of the voice. And though the musically its much more of the same distorted, repetitive semi-loudness, the drums carry a hip hop beat to them which spice the album up, if only for a moment. Yet, the lyrics are all about this Marianne who said she’d break “my heart”. And it did happen.
In the end I feel like there is too much sadness on the album to help it float. I mean, I envision them performing in a club where a bunch of emo or goth kids are rocking back and forth with blank, tearful faces perhaps smoking and/or drinking. Its the same thing from song one to ten. It doesn’t have enough diversity to keep me interested, particularly with the vocals. If everything sounds fuzzy, what am I to focus on. They have the noise part down, I’m looking for a little more pop.
Rating: 3.8/10
MP3: Ceremony “Marianne”
Buy: iTunes