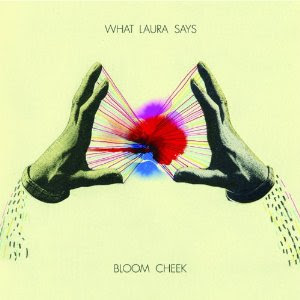 What Laura Says: Bloom Cheek
Based in Phoenix, Arizona, What Laura Says are a five piece band that are a bit hard to describe. If their last album, Bloom Cheek which dropper last July is any indication of what they are, it’s a musical hybrid. At times they seem poppy, with pianos and guitars providing you something you can get up and move to; they’re a bit acoustic Americana with a shuffling feel like a train chugging down the tracks. At other times, they’re more bluesy and let the guitars just take control of the album.
The album opens up with “Training”, which gives you the wrong impression about training. Training generally implies a type of grueling repetition whereby you struggle doing some useless task all in the hopes that it makes you faster, stronger, better. But not this song. This song is a laid back indie rock track that reminds me of a softer Jamiroquai.
From then on they take you onto some poppy Americana where the acoustic guitar lends a folksy feel to the lyrics (“On the Fence”). Follow this up with “Bloom Cheek” where they add some soulful backing vocals and some delightful keys.
Two of the best songs on the album appear back to back. “I Suppose” kicks in with a bluesy guitar riff followed by some poppy piano play; there’s a jazzy feel to the song but it might be better compared to a fast waltz. The song breaks down into some classical piano play as it goes out. Next track is “Keep Running Shoes Special” and it comes on quickly. It is modern day Americana with bluesy guitars that harmonize with the vocals. The technique reminds me of Chuck Berry.
From here on out, the album moves from one sound to another, but always stays with the Americana/blues/Pop/Indie rock feel with some adult contemporary mixed in here and there. In a nutshell, it’s hard to say how I feel about the album as a whole. It doesn’t sound much like anything modern with all the genres it touches, yet it doesn’t sound entirely outdated. The changing styles of the songs gives it a refreshing feel as you aren’t inundated with the same thing over and over. On the other hand, Bloom Cheek lacks something to make it stand out. It’s quite average once you’ve finished it remembering mostly the first and last things you’ve heard. The middle just gets dissolved until you can’t tell where the first and last songs meet. The album lacks cohesive progression.
Rating: 5.3/10
MP3: What Laura Says “Keep Running Shoes Special”
Buy: iTunes or Amazon