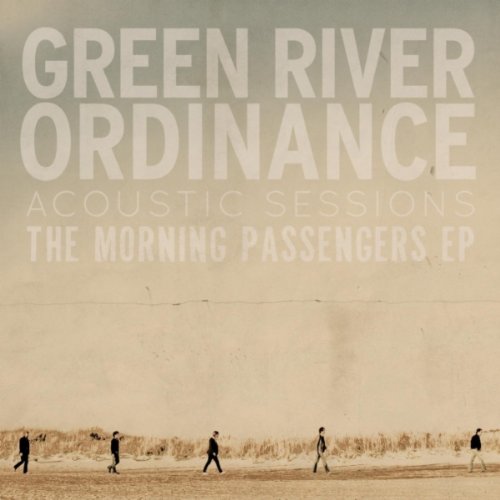 Green River Ordinance: The Morning Passengers EP
Green River Ordinance have been together over ten years. That’s a long time for any group of people to be together, particularly in as intimate of a setting as a band. You work together, live together on tour, and undoubtedly take the time to play together. The importance of being friends if not family can face some struggling times when there isn’t enough alone time. But you’d never get the sense that anything distracting, or defeating gets the best of them from their 2010 EP The Morning Passengers.
The whole EP is performed acoustically, which in my mind always makes me feel as though I’m sitting in with a small group of an audience watching the band perform. It has a feeling of closeness if not intimacy to it. There’s no rush of energy from hard charged electric rock riffs. The drummer does not perform some type of impression of the Muppet Animal. No, it’s a softer sound that allows one to focus on the vocals, or the individual stringed instruments, of which there are plenty.
I compare singer Josh Jenkins’ voice to Counting Crows crooner Adam Duritz. Though I feel Josh has a more natural voice in that he doesn’t seem to force the notes out as Duritz might. But this could have more to do with the acoustic aspect of the album. I get the feeling that Josh would be just as powerful if he had to step up the output to cover all the noise an electric set might bring.
Musically, I’d have to compare the band to other acts that have had success with acoustic performances. “Uncertainly Certain” adds a piano to the fold along with the soft percussion and the cello. I’m reminded of The Fray. The press release compares “Undertow” as well as “Inward Tide” to the Goo Goo Dolls hit “Iris”. I’d have to say that’s a wonderful comparison, as all three focus on a softer sound with an air of vulnerable love to them.
Mostly, though, I’d have to say the whole album sounds a bit like folksy rock, perhaps at times like Christian rock. But never does Jenkins use a drawl to make it too southern. In fact, it sounds like something from the south moving to the cities of the east or west. But a heavy theme to the album is love.
One of the first ideas when listening to the album was how these songs sit on the same scale as songs by Barry White. Only, they sit on the other end of the spectrum. While White’s songs would often have to deal with the love making, The Morning Passengers deals with living in love.
“Dancing Shoes” is a refreshing tale of what one person can mean to another. An assortment of stringed instruments from guitar, to banjo, to mandolin, give a warm undertone to the song. And with lyrics such as “all my loving arms are for you” along with “put on your old black dress and dancing shoes”, you get the sense that there is more to life than sex. And there is. Jenkins continues his message in the next track “Uncertainly Certain” where he doubly reinforces the person, not an act with the person, with “In a world where nothing ever seems so certain, she’s all I’m certain of”, and “In a world that seems so far from perfect, she’s all I’m looking for”.
Overall, perhaps it is a bit cliched from time to time. But I have a friend who’s said a time or two, that cliches work. Otherwise, they wouldn’t be so cliche. And following the feel of the acoustic music, some of the most intimate moments one can have are those where you’re discovering aspects of another person without using your hands. All in all, The Morning Passengers is a solid work. You get lost in the narratives as well as the harmonies. After all, if they’ve been playing together for 10 years, they must be good at what they do. Or maybe just great.
Rating: 7.8/10
MP3: Green River Ordinance “Dancing Shoes”
Buy: iTunes or Amazon